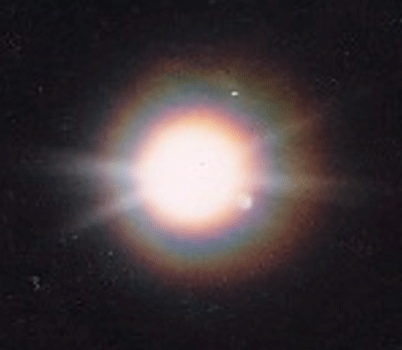 Two months after Titus joined the Rainbow there was a one-week prayer meeting at the cabin on Titus’ Farm. Friends from different directions came, including Rusty. Then it was decided to ceremonially use Titus’ moccasins, to empower the focus of the coming together of east and west, in peace.

It was decided then that one moccasin would stay at the cabin and the other was to be placed on Mt. Fuji in Japan. This happened and, later, friends from around the world agreed to hold a ceremony at the same time, with the idea of the East-West Union for world peace. So many confirmations were later reported that the ceremony was certainly deemed a success. Thunder, lightning all around and a light drizzle were noticed at the ‘East-Moccasin site’.

I went later to Mt. Fuji to pray at the place where the other moccasin was placed. There I again smoked the pipe. Then… lo and behold, the ‘Littlesun’ appeared, this time on the right side of the sun. Then, upon completion of my East-West global journey, I noticed that the number of days it took was 108. Shortly afterwards another prayer meeting took place at Flagstaff. Again friends from many directions came. The meeting was centred around Titus’ birthday, December 25th. On that evening there was a full moon and around it was the most brilliant rainbow. The next day there were two ‘Little Suns’, one on the left and the other on the right side of the sun. Since then I couldn’t help but give in to the great feeling of the rising sun within, and continued the global travelling to share the medicine of the Oneheart.

The name ‘Littlesun’, similar to the name ‘Hopi’, is not an exclusive one. Every one who wants to see that the Earth becomes enlightened is a ‘Littlesun’. Then together we will help Mother Earth to be birthed to become Mother Sun!