How this name was confirmed

A hidden shrine near Flagstaff, Arizona, became a place where my Hopi father and I often prayed together. On one such occasion Titus told me that after he joined the Rainbow, I must come to the shrine and commune with him.

On the fifth day after Titus passed away I went to this place of prayer. His daughter Rena and his granddaughter Verbena came along. As Rena sensed Titus’ presence I started to smoke the sacred pipe that Titus and I often smoked together.

Upon finishing the pipe I turned to the sun to offer the last puffs of smoke. Then, lo and behold, there appeared a full rainbow around the sun! A bright light (‘Littlesun’) showed up on the left side of the sun. Then the rainbow colours shifted and circled around the ‘Littlesun’.

Upon leaving the shrine there was a little brown snake on our path. The Hopi call it the Tawa (sun) snake. They say that this snake can spiral up into the sun. I opened up my medicine bag and took out some of the Homa (ground white corn) to sprinkle it over the snake, from tail to head. Then the snake left for the nearby creek.

I looked back to the sun and saw that the ‘Littlesun’ had disappeared. The basis for me to travel around the world from east to west was then set, and the name ‘Littlesun’ (that I already chose before in a preparatory stage) I will honour until Mother Earth has become Mother Sun. 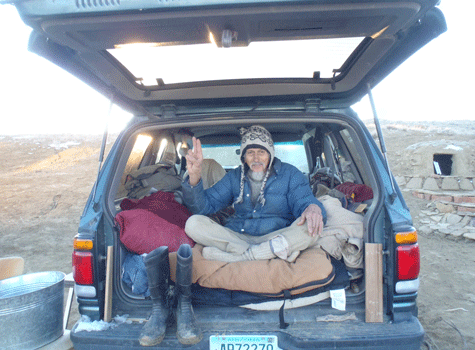 “Roy Home” was complete with a Kitchen, Bedroom and Office. This way he could be “anywhere on the Spot”