The evening before departure Phoenix was bathed in the light of an electric storm. This I thought was significant, because the journey would go along with the sharing of the Phoenix Ceremony. Great Spirit showed this ritual to me. It consists of the weaving of eight flat sticks and it looks like the “union jack”. This pattern, after “depositing” into it the things and ways we don’t need any longer, and which limit us, we burn in order to rise above it. In other words, let the Phoenix rise from its own ashes. The ashes can then be used to remove stagnation by sprinkling it at places that need the liberation.

Four days later an indoor evening ceremony took place in Hawaii on the island of Oahu. At the time that eight Phoenix boundaries were put on flames there was thunder and lightning all around us, followed by torrential rain. I was told later that there had been a two-month drought on all the islands. Moreover, it hardly ever thunders in Hawaii.

Later on the Big Island of Hawaii I met with Fatima, an Amazon woman who had come to the USA at the age of eighteen. Here she was welcomed by an Apache elder, Wild Horse, who spoke her language. He explained that he had visited the Amazon jungle where Fatima’s people had saved his life. Now it was his turn to safeguard an Amazon’s life. Since then Fatima had been able to travel safely throughout Washington D.C. where she had stayed for a few years.

Fatima noticed the staff I travelled with, the base of which was an Elk hoof, and remarked that Wild Horse had given her a similar hoof…this shocked me because, at the same moment that I had found that hoof, in an Arizona forest, the Image of “Tom Brown’s” grandfather (from the book) had come to mind. This story about a grandfather, also an Apache, and who had also gone to the Amazon, was similar. Could Wild Horse and this grandfather have been the same person?

Fatima is also known as a Dreamer. So I gave her Homa (Sacred Hopi cornmeal used in ceremonies) with the request for her to ask Wild Horse (who had already joined the Rainbow) to give her a dream regarding a possible relationship between the two hooves. The following evening Fatima received the Vision. Wild Horse showed Fatima a large Amethyst crystal through which she could see. At the other end a strange pattern could be seen. Then the Apache said “I gave Roy something when he was in Washington D.C.”

In D.C. I had indeed a large Amethyst crystal that I often used in ceremonies and when I showed Fatima the Washington pattern she said, “that’s it! “ 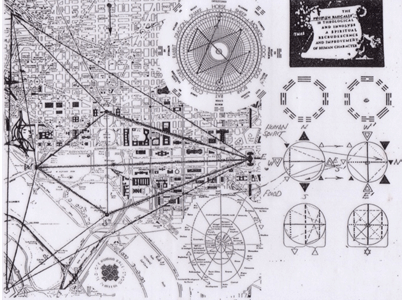 The DC Map in correlation with the Divine PLAN