The Creative Process, from the Unknown to the Manifest in the Human Form by which Mystery Egg can Hatch the I AM 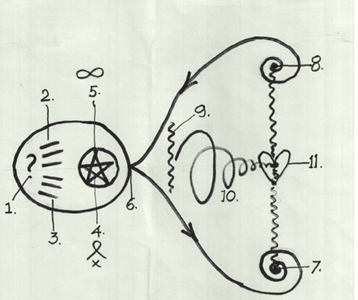 1
Mystery Egg (containing the Attributes for the Hatching: 2, 3, 4 and 5), the PORTAL that inter- connects the Unknown or Great Mystery with the Realm of Manifestation (Creation).

2 +4 –
The 6 Channels (6 lines) are the “double-Trinity”. 2 is the Trinity that creates REACTION, because it lacks the Unifying Center or Catalyst, and correlates with the Pentagram without the Circle. With this Energy the MIND in Synchronicity with the Earth (East, right-brain and West, left-brain) and its Horizontally based Perception comes into operation. And with it the Human can Deviate from the Natural/Universal Order, to Experiment, and Learn about different Possibilities, which can lead to New states of Being. The 6 Channels also correlate with the 6 Directions of the Individual (left-right, front-back, up-below), which are needed to locate the Inner-Center. And all together (6 directions + 1 center = 7) constitute the 7 Chakras which we can use to Liberate Ourselves from the 3-dimensional Density (breaking through the “Shell of Mystery Egg”, the Ionosphere).

3+5
3 is the Trinity that has the Unifying Center, whereby CHANGE becomes possible. Hence Change becomes the Absolute and Eternal CONSTANT or LAW of Laws. And the Pentagram within the Circle shows the Polarities by which the Reactionary Energy can be Controlled. in other words, with the ONELAW the Secondary laws (“right-wrong”) can be Controlled FROM WITHIN. But before it can be Consciously Mastered, the Genuine Human must be Realized via the Evolutionary Process (10) and the I AM Consciousness.

6-
By the WILL of the “ONE Who Dwells in Great Mystery” (GOD of Gods) the “Attributes” can be Used within the Realm of Space and Time (= Delayed Perception of Here and Now), for the Human to have the Experience, to find out what it takes to HATCH Mystery Egg with the POWER whereby the Realm could come about. This Release of the WILL is the Original Polarization (“Big Bang”), which evolves in FREE WILL with the increasing Awareness that the Human is the Totality within the Totality, who can use Intelligence and logic to Transcend the Limit = FREEDOM.

7 + 8 + 9 +10 = 11
With the Polarization the Reactionary Energy (9) Proceeds along the Evolutionary Process (10). Finally, the Polarity is Contained in the Human Form, which are the Small-intestine (7, inner-Earth) and the Brain (8, inner-Heaven). As such the Portal becomes Manifest with the HEART (11, inner- Meeting-point of Heaven and Earth), which means that with the inner-Trinity of the Human (the 3 Fires), that what the Mystery Egg contains, can be Hatched FROM WITHIN. Therefore, the Human must become Conscious that ALL IS ONE.
NOTICE that the Reaction (9, Conditional) created by the one becoming the TWO Changes into the Union (11, Unconditional), by the TWO becoming the ONE. This Total Process is Condensed with the Symbol of the Heart/Love

All of the Above perceived from the Earthly point of view

A- Earth ; B- Electro Magnetism ; C- Ionosphere ; D- Food ; E- Small-intestine ; F- Brain ; G- Hatching/Liberating the I AM from the 3-dimensional Density. 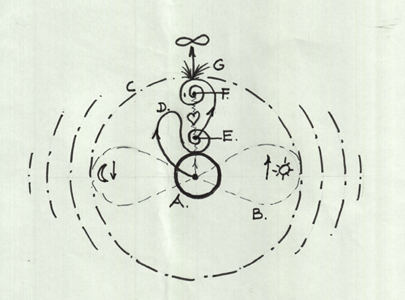