The first eagle feather that was given to me came from a woman (Marilyn Youngbird) who received it at Hopiland. I treasured the small feather very much, always carrying it in my wallet. Since then I have become increasingly aware of the significance of the eagle, representing the ‘Creator’s Eyes’.

Then one day, while living with the Hopi, a woman (Marietjie Venter) from South Africa visited me and gave me a feather of the African Crowned Eagle, named Titus! Her friend (Izolde Hellet) took care of this wounded eagle, that was later successfully released back into the wild. Izolde didn’t have any idea that my adoptive Hopi father’s name was Titus.

This encounter led me to visit South Africa during my journey around the world. Upon arrival Marietjie let me meet Africa’s well-known prophet Credo Mutwa. His welcome words were “I have been waiting for you and want for us to have a ceremony”. It lasted four hours. At the ceremony Credo gave me the Zulu name ‘Mandiza’, which means Flying Eagle. Then he told me that I would meet with my eagle. When we left there was a cloud in the sky that had the shape of a flying eagle! 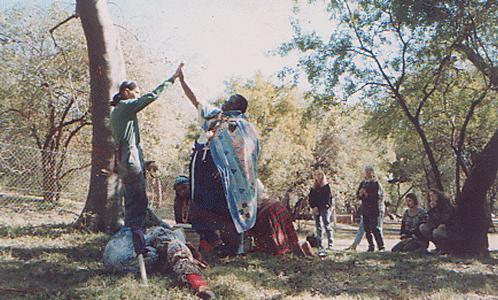 Upon my second visit I was asked to build a Circle of Hearts Medicine Wheel near a mountain held sacred by Africans. Two well-known black eagles (a couple) from the botanical garden circled over the wheel at the end.

On the following visit I was told that the male eagle was missing and that the female was sitting on two eggs. This would make it impossible for the female to find food.

So, I decided to hold a ceremony at the medicine wheel and smoke the Black Eagle pipe that Credo had made for me. Two days later the female eagle was seen flying with a new male eagle. This is very unusual, since eagles mate for life and will never make a ‘second choice’. This couple created two eagrets afterwards. The former relationship was without eagrets for seventeen years….

Then I received a call from Izolde saying that she has been visited every morning by a young Crowned Eagle, which she named after me, Littlesun. “You must come over to Durban and meet with your eagle”, she said. This I did, and for four days I held a pipe ceremony near the tree that the eagle flew to each morning.

On the second day the young Crowned Eagle flew so close over the sacred pipe that was lying on an altar that I thought the bird would grab it.

On the third day Izolde gave me an ox heart and told me that I had to feed my eagle. So I placed the heart on a tree branch where it could be easily seen. The eagle twice flew over it without grabbing it. Why?

Then we saw Littlesun high up in a dead tree, in ‘conference’ with an older Crowned Eagle couple. This lasted quite some time, until it was lunchtime. I remained outside watching the Eagles and, at the moment Izolde served me my meal, the young eagle flew down and grabbed its heart! The ‘conference’ with the older couple was about getting permission to gather food in their territory.

On the fourth day Littlesun didn’t come during the pipe ceremony. The altar remained in the open, with the pipe still attached. Then Izolde and I looked up and saw the eagle high overhead, making its first soaring flight. When it was right above it stopped for a second and flapped its wings. Then I made the wish to receive just one feather.

The Medicine Man called Roy Littlesun has been my friend now for two years, and we together are working for the rehabilitation of prisoners and the healing of South Africa as a whole.

“Mr. Littlesun is also working with me on Indian Hopi and Zulu prophecies regarding the coming millennium prophecies of great importance to our people and his. He has earned himself the respect of many healers in our community, and we would be honoured to see him and work with him once more.”