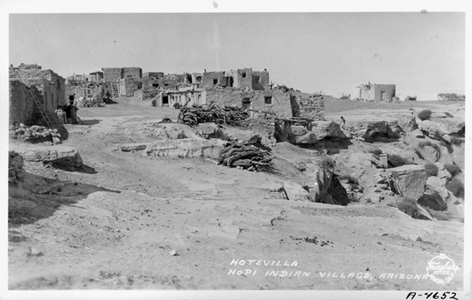 Hotevilla and the Land where Titus told me to Build my Home and grow Corn. Here I found the stone that the Crow guided me to.

One part of the triangle story has been kept out until last, with my hesitation, not knowing whether the timing was right. Deep prayer revealed that NOW is the best time for truth.

The following took place after the episode of the completion of the Purification Song (read Titus the Hopi). On that day I descended from the San Francisco Peaks where I had to find a stone among yellow flowers….

Going upwards towards the place where the hawk landed next to me…. the first indication was given of what the stone would look like. An oval stone broken in three pieces was right on my path. The middle part had the shape of a triangle…. I picked them up and placed them on a large rock where it could not be disturbed. On my way back the broken parts were gone. This was strange, because the mountainous path had hardly any traffic.

Having arrived at the place of prayer I saw thousands of yellow flowers and millions of stones! Where to begin? The Hopi gave me seven Pahos (prayer feathers) that had to be placed in a certain way.

On the third day I decided to place the feathers as instructed. After they were tied to a pine tree with low hanging branches, I sat down on a flat rock, contemplating how to find the stone. Thousands of yellow flowers and millions of stones….

I looked around me and started to count the number of yellow flowers. I could not count more than seven that were in a radius of twenty meters. Could there be a relationship between the seven Pahos and the seven yellow flowers?

The stone to be found must find me! Thus, I looked in front of me, down…. and saw a broken stone sticking out from the earth. Where was it broken from? Looking to my right side where a part of the mountain descended I saw that a part was broken off….

Pounding heart…. digging up the broken stone…. bringing it to the mountainside… to find out that they fully fit together!

The stone had two broken parts and the shape of a pyramid with the cap missing. The greater part fitted to the mountain. Where could the upper part be so that it together can form a triangle?

On the fourth day I descended. It was full moon and I forgot about the three moon cycle message from Spirit. On that day Rusty Meyers had the dream.

A month after Titus joined the Rainbow I went to the land where he said I must build my home and where I will find a stone. Again, I sat on a large flat rock, contemplating. Millions of stones on the side of a magical cliff…. Then a crow descended about fifty metres away on my right side. The bird started to caw in a most powerful way and would not stop. Trying to get my attention?

So I projected to the crow: “If you have something to show me then fly over”. Immediately the crow flew up towards me and stood still in mid-air for a second when it was right over me, and then landed on my left side where it again started to caw with the same gusto.

Then I projected to the crow: “Show me where the Stone is”. Immediately the bird flew to the side of the cliff where again it started to caw, and then flew to the east when I started to walk into the indicated spot about a hundred meters away.

After the climb it was hard to be precise of where the crow had been. Then I saw a fresh crow dropping! I looked down and there was a broken stone sticking out of the sand…. It had the shape of a triangle.

Coming back to Titus Farm the KNOWING was CONFIRMED with the stone just found, to perfectly fit on the stone found earlier – together forming a triangle!

Then a Spirit Message came through that two more stones had to be found (I already knew where to find them). Together with a ‘Stone with Four Faces’ found sometime before, all had to be placed in the Kiva where Dan Evehema (‘Little Dan’) was Steward. Why?

Hotevilla was build on a shrine that had the purpose to spiritually project the Earth into a microcosm where the Hopis can do the ceremonies to help with keeping the Earth in balance. Any disturbance of this shrine will lead to destructive consequences such as earthquakes.

The Dark Elements who have invaded the Hopi with the illegally installed ‘Hopi Tribal Council’ (part of the microcosm of the world) have been trying to disturb the shrine with their digging machines. So, on the day that holes were made to install telephone poles, the Kobe earthquake happened, that cost the lives of 5,000 people.

This disaster had been forewarned, but the Dark heeded as much as today’s warmongers. The shock temporarily stopped the attempt, but then the move was renewed and this time the sewer system machines would invoke much greater destruction. The only way to prevent this from happening was to ether vertically elevate the shrine with the help of the Light Beings of the Sky. Therefore, a gate had to be created, and the placing of the five stones in a certain order was essential. Dan Evehema needed to be convinced next.

Two Hopis were present at the time of the proposal to have his Kiva serve as the portal. So far I did my part. How would Dan react to this ‘unusual’ request? P

Dan Evehema closed his eyes and prayed. Then he opened his eyes and said “YES”! Since none of the Hopis were supposed to know about the placing of the stones, it was difficult for Dan to find an opportunity, since the Kiva was constantly observed a day before the most important ceremony of the Hopi (‘Bean Dance’). But somehow Dan managed.

Then at twelve midnight the ceremony began (ending with sunrise) and, with the first song a bright light in the sky, went from east to west right over the Kiva. In each of the Four Directions a light of a different colour each was seen.

The next day with sunrise a strange flow of clouds came over Hotevilla and formed a triangle, from where a curtain of clouds descended. Then a slight rumbling of the Earth began and stopped on the third day. The fourth day showed a clear blue sky. Dan Evehema was excited and confirmed with saying “Job well done!”.

This story I have shared with a few friends, and I wondered if it will make a difference when it is shared with a sterile world that believes only in the rumbling of the most destructive wars, waged with ‘smart weapons’ by stupid people. A world that is powerless against the most primitive form of life, the virus. A world that let itself be controlled by a computer that is one hundred years behind the computing capacity of a simple cell. A world governed by people who at best can only use 11% of the brain to think.

The ‘Rumbling of Hotevilla’ was not just of the Earth. It was also of the Inner Earth, within the body, to awaken the slumbering Soul. It is time to WAKE UP and REMEMBER who we truly are. We came to Planet Earth as a co-creator to create the Greatest Miracle, WORLD PEACE!

Today I consulted with the Spirit of Dan Evehema in ceremony with the Sacred Pipe that Dan, Titus and I smoked together. The name of the Pipe is Mongwi and means Teacher. This time the teaching came through with the confirmation of the Pipe Rumbling. This has never happened before. All of this that happened is normal in the Spirit World…. not to be experienced under ‘mysterious conditions’, but at any time when we are in touch with the TRUE WORLD. This resonates to the Truth that ‘God Made Himself’. So, where is God? The closest we can get to Him is within!

The story is not over yet. The rumbling will change into a song of joy, when the key is delivered at the Kiva, where in vision Mongwi was filled with the sacred tobacco. Soon it will be smoked, I pray. Reconcile with forgiveness, so that wisdom can replace ignorance. We reflected each other’s weakness. Now we have to resonate each other’s strength in the CIRCLE of HEARTS. I want to come home and grow corn. 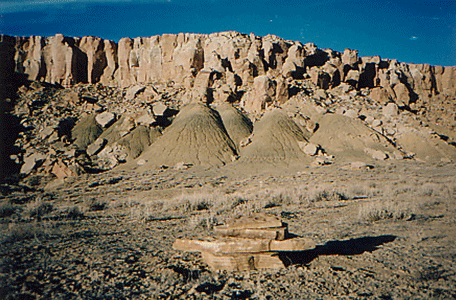