Giant Rock “Reduced” to a 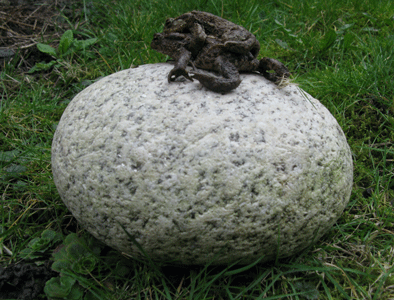 Two mating Frogs welcomed Mystery Egg´s visit at the region from where Stonehenge´s stones came from.

Hopi Prophecies stated: “when the Gourd Full of Ashes explode, this would be the Sign that Humanity must Return to the WAY”. This happened with the Atom Bombs dropped on Hiroshima. The Prophecy also stated that “there will be another Gourd of Ashes, which is of Peace”.

For 23 years a Gourd went around the World to be filled with Ashes of Phoenix Ceremonies. It became Full. At one ceremony, where the Men returned the Fire to Woman, the Heavens responded with Two Clouds joining, to then separating to the East and the West. Afterwards a Rainbow showed at the East. Also, a Ceremony was held at Mt Fuji, where the Earth was asked to Release Her Power Peacefully in Correlation with the Seven Chakras of the Human. Afterwards in 1-2 days Seven Volcano Peacefully released their Ashes (6 around the Fire Ring of the East and one in Europe, Mt. Edna).

On June 22, 2019, the “Gourd Full of Ashes, of Peace” was cremated with the Phoenix Ceremony and mixed with the Ashes from the Mt Fuji Wood Fire. This Medicine of Peace will then be Shared with Humanity around the World. The Ceremony included the Prophetic Mystery Egg.

1- 1996: Roy begins his Global Journey from East to West from Phoenix/Arizona. On his first stop, Hawaii, the Message was delivered in Ceremony. The responding Heavenly Sign during the Ceremony, Lighting and Thunder impacted a few meters away from the place, with torrential Rain following. It was noted that at that year all of Hawaii was plagued with Drought. At that Ceremony the Rain came back on all the Islands. It was also stated by a few that at the Hawaii islands Lightning and thunder is unheard. Only sometimes rumbling high above the clouds. Was it the beginning of the “Day of Purification”?

2- The Hopi Message went further: Japan, China, India, Israel, South-Africa, Germany, Italy (Rome), Great Britain. Upon arrival, back at Phoenix, Roy found out that the entire Journey lasted 108 days. From there on the Global Journey Continued, until today.

3- Too much to mention about what happened in the next 20+ years…but to get an idea about how it all has come to a concluding stage… While at the center of the Glastonbury Zodiac (GB), where Roy builds a Stone Circle, an Elder (Eva) from the Waitaha (New Zealand) was present during a ceremony held at the medicine wheel that Roy build at the “Heart of the Dragon”, where also the Hopi Blue Corn was planted. The Elder brought with her an Egg shaped granite stone (10kg), and explained that it was her most personal sacred treasure…but Spirit told her that it has to be given to Roy Littlesun. She then started crying. Roy accepted the Stone and at a later date brought it to Barcelona, which is Globally exactly the Opposite of New Zealand.

4- Afterwards the Egg Stone went to Mt Fuji/Japan to be a part of a ceremony of which the focus was to have the Earth Peacefully Release Her Excessive Energies, Peacefully, with the Help of the Seven Chakras of the Human. The Response was that in a few hours Seven Volcano Peacefully Spewed their Ashes, which is quite unique in recorded Earth history! Six of them were of the Pacific Basin and one which is closest to Barcelona, Mt Edna.

6- Te Porohau invited Roy to come to New Zealand for a meeting with the Waitaha People. Roy came and was asked by Eva to again Receive the Egg Stone. Now the Stone is waiting for its Conclusive Ceremony, to be Hatched?

7- Expanding on 5…Barcelona, New Zealand and Japan form a BOW, with Indonesia as the Center of the connecting Bow’s String. And what happened earlier, the Tsunami South of Indonesia…this represents the Water Element. And Japan, the Dragon-island representing the Fire Element. With this Water-Fire Polarity the ARROW can be Released with the Power that is created by the UNIFIED Reactionary Energy, which was generated with the Human Experience. As such the LIBERATION according to the PLAN!

8- Expanding on 7…the Arrow following its Path via the N-E (and then down to the South) will ARRIVE at HOPILAND (examine the Globe)! And further on going South, to the MAYA (Mexico/Guatemala) and finally the INKA (Peru). Then…on the Peru-Japan line we find the Center of the Pacific, HAWAII! All the locations so far mentioned correlate with the PLAN’s design.

Cremation of the Gourd Full of Ashes of Peace at the Mt. Fuji region