South Africa’s Draken’s Berg (Dragon Mountain) has a mountain ridge that relates to the Dragon positioned from West to East, with its head at the East-end. Here a ceremony was held in conjunct with the creation of a Circle of Hearts Medicine Wheel. The Dragon was asked to turn around and help with purification of the World. The following story confirms to what degree the Dragon’s energy has come towards the West.

Then, on February 16th 2000, at the world’s largest Granite mass (stone Mountain at Atlanta/Georgia), a sacred Hopi pipe ceremony was held by me with the intent to connect this mountain with the Draken’s Berg. The focus was also on having the Rising Sun energies move towards Turtle Island and beyond so that the Purification can come in a not so destructive way.

It must be noted that Atlanta’s granite mass is a cap on a volcano!  The pipe ceremony included the vision of the gentle release of Mother Earth’s energies.  To my great surprise and delight I came to know about what happened with California’s Giant Rock four days later.  The Rising Sun energies have indeed made it that far!  Thanks for all who were part of helping with this shift.  Let’s strive forth with certainty.  What must happen will happen. 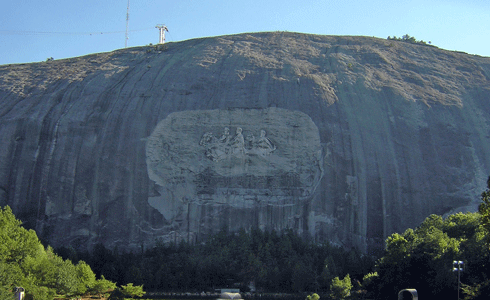 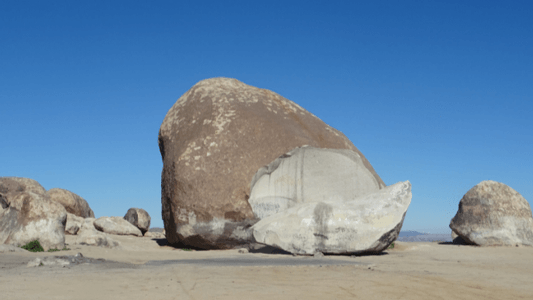 Before Monday Morning on the 21st February 2000, Giant Rock was considered to be the largest boulder in the world.  It is now two boulders.  A slice of rock fell off from the boulder at 8.20am Monday, exposing a gleaming white granite interior.

In ancient times the Native Peoples of the Joshua Tree, California area, held Giant Rock sacred.  So sacred in fact that only the chief was allowed to go near it.  Everyone else had to wait nearly a mile away while the Chief communed with the spirits of the “Rock People” who had prophesied the day when the Mother would split open and a new era would be revealed.  Most other traditions have pointed to this time in our history as the awakening of the Divine Feminine, to a world based upon compassion and peace.  Now that Giant Rock has split, many people believe that the prophecy has been fulfilled.

On February 19th & 20th 2000, Shri Naath Devi was inspired to bring a number of powerful healers to the desert near Giant Rock to pray and meditate.  She said that the Native people were no longer doing ceremony in this area and that the Earth itself was about to react with a violent upheaval.  If the mother accepted the prayers that were scheduled, the Giant Rock would crack at the side, relieving pressure on the Earth’s tectonic plates.  If the prayers were not accepted, then Giant Rock would split directly down the middle.  The fact that Giant Rock has not moved for millions of years made the likelihood of such a change remote.  And yet, the next morning, to every ones amazement, the boulder had not cracked; rather one-third of the rock had split and had fallen to the desert floor.  Shri Naath Devi interpreted this in the most positive light.  She said that the Mother had opened her arms to us, cracking open her heart for the whole world to see.

Fr. John was there for part of the prayer.  He too felt the incredible shift and joined two of my assistants, Laurie Joy Pinkham and Will Clark, who had participated in the prayer with Shri Naath Devi.  They had gathered at her house less than 24 hours later.  As they stood in the kitchen discussing the events, lightning struck, sending a ball of light through the center of the house in a North/South direction.  Within moments lightning struck again and shot through the house in an east/west direction.  This was a very auspicious moment and was witnessed by all four people.  Shri Naath Devi declared that the prayers were now complete and that the lightning was honoring the four directions as a sign two hours prior to this gathering.

What does this mean?

We stand at the threshold of an amazing opportunity.  This is the time when we rediscover within ourselves the peace and compassion of the Divine, and the Earth itself will mirror this shift.  There have been many signs over the last few years: the White Buffalo Calf, comets that have come and comets that will come again over the next few months.  All these lead us to believe that the time the ancients have called the “Great Shift” is at hand.