The Cosmic Instructions were given to the Hopi to find the “House of Mica”, when according to prophecies the “gourd full of ashes” (atom-bomb) comes to explosion. This happened in 1945, notably not too far from Hopiland, in New Mexico. The House proved to be the UN-building in New York.

Then the Message of Peace had to be delivered at the UN. That, it was time for Humanity to RETURN to the Order of the Universe. The Hopi had to make the attempts four times. Grandfather David Monangya led the delegations and Thomas Banyangya was his translator, who was later dismissed by Grandfather David. I met with Grandfather two times (1970 and 1984).

The UN-Door remained closed during the four attempts. Thus the Message moved into another stage, which took about twenty years before the prophetic sign, for making the “fifth attempt”, became evident.

Meanwhile the “new world order” became known to the world, announced by the Hopi (Masayasva, Chairman of the Hopi Tribal Council) shortly before president Bush made it official to the world. This was in 1990 with the massive show of “smart-weapons” during the Gulf War. The war along with the flowering of a special yellow flower at Hopiland, was the sign for making the “fifth attempt”.

At this time, I found myself in Hopiland while taking care of Titus Qomayumptewa who later adopted me according to traditional custom (confirmed by Kaleb Johnson in Old Oraibi). 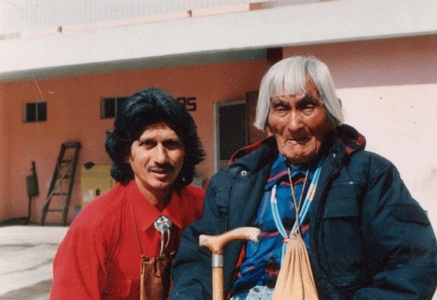 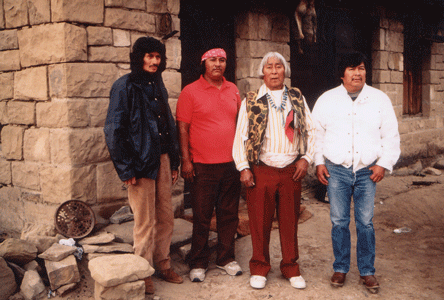 Martin Gasweseoma who was the keeper of the sacred Fire Clan stone tablets (representing the Title of the Earth) asked Thomas Bahanyaka to help him with the “fifth knock”, that had to be made at Santa Fe (New Mexico). The “knock” concerned the request of the document that was signed at the treaty between Mexico and USA, stating that the Hopi are a Sovereign People and not to be part of the treaty. Along with the request the stone tablets had to be shown, to prove that the Hopi have indeed the DEED. Thomas refused, because he claimed that he was the one who must open the Door at the UN (this attitude caused him to be dismissed earlier by Grandfather David). Martin made the request four times, without success.

“Now everyone other than a Hopi can be a Hopi and be delegated the task”, Martin said. Titus agreed and said “Roy you must help Martin”. Upon a visit with Martin, we agreed to collaborate. A month later the arrangement was made and a reception with governor Bruce King at Santa Fe was set. Then Thomas although not agreeing with the arrangement gave in to be Martin’s interpreter and joined the delegation anyway.

Shortly before the meeting a fast climb was made along a mountain to bury the Medicine to call up the “Purifier from the East”. This ceremony had great consequences and became also evident with the coming together of the Purification Song” (read Purification Song), to begin with…. Upon the return to Hopiland, although it was midwinter, we witnessed snow, lightning and thunder. Much Power could be felt.

From here on my “educational tests” began! I would have given up the “Hopi thing” if it wasn’t because of Titus who gave me the experience of “the teachings are in the corn” and his encouragement of “shake the anthill and tell the world the truth about Creator’s Law”. 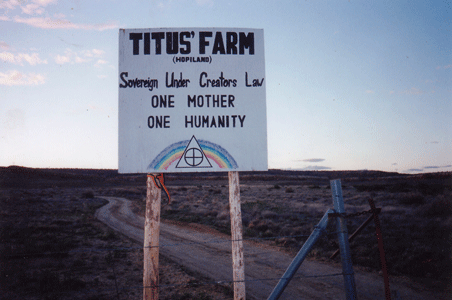